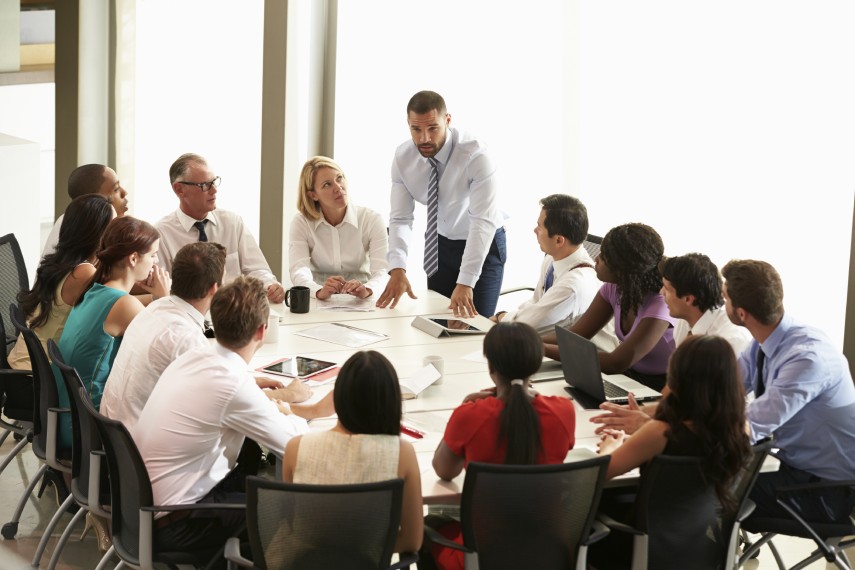 What can you do to lead change effectively in the middle?

Leading in the Middle in General

Top leadership has responsibility to shape the organization and set its direction. Further, a big part of their job is to tend to external relationships and to position the organization in relation to competitors and other external challenges for optimal success.

In the core of the organization, individual contributors produce the products or services the organization has chosen as its core business. They do everything necessary to deliver the outcomes valued by customers.

Middle leaders and managers play a crucial role. They are the organization’s integrators. They mediate between top leadership and workers in the core. They translate direction into action at the production level and they ensure that action at the production level meets the expectations set at the top. They are important conduits for the flow of information down, up, and sideways, they regulate the system to maintain stability, and they work to reconcile expectations and demands from those above and below them. They also constantly get pulled from above and below.

Leading in the middle on the average day is a tough job. Mix in an organizational change of some magnitude and, well, the job just got a little tougher.

Becoming an Effective Change Leader in the Middle

So, here you are. Your leadership has announced their intention to change some aspect of the organization and its operation. They’ve been thinking about this for a while before the announcement and they’re way down the road in their own heads. They have an image (maybe a well-formed vision) of what will be different and how it will be better than what there is now. They’ve considered (to some degree of thoroughness) the rationale, the benefits, the risks, the cost, and the time and effort it will take. They concluded it’s all worth it and decided it’s time to go.

The folks who report to you have assorted reactions. Depending on the magnitude of the change, they are anywhere from annoyed to deeply panicked. Some may even be excited about the change believing that it’s about time.

No doubt this is a dynamic that many of you reading this are familiar with. Top leaders are down the road and anxious to have others catch their urgency. Others may be struggling to make sense of what they just heard and wondering how it will impact them. And everyone is looking at you.

Given these dynamics, what can you do to play a consequential role? How do you lead effectively in the middle?

Understanding that the middle space poses distinct challenges, there are four actions you can take to lead boldly.

1.  Claim the change leader role for yourself at your level

As we’ve noted, organization change, like much of your regular job, presses on you from two directions. It comes from above with expectations from top leaders about urgency, alignment, and the need to execute according to plan. It comes from below in the form of questions, concerns, and the need to reassure and guide those who will be affected by the change.

First, it is important to demonstrate clearly your support for the change. Your boss and your direct reports are watching. They’re looking for cues about your level of support. If you’re ambivalent or indecisive, there can be two equally unfortunate outcomes. One is the loss of faith from your boss that could have career implications. The other is that you’ll struggle throughout the change to mobilize the support of your direct reports. Avoid both by declaring your support for the change from the beginning.

The second part of claiming the change leader role follows from the first.   The change – whatever it may be – needs to have a strong local face and a local character. That’s your job. A risk for any change is that it remains an abstraction that is happening at a distance – like watching the news from somewhere far off. When you resolve to become the face of change leadership for your unit, the change takes on a different meaning and a different character.

So, stake your claim and establish yourself proactively as the leader of change for your unit. Here are three additional, closely related actions.

2.  Make it your business to learn the business of change

Change management has become a well-developed discipline over the past 25 years. Change Management can be defined as the planned, deliberate process to prepare and engage people in making and sustaining organizational change. Change Management comprises a continuum of actions, decisions, and behaviors that extend from leading the change effort from a project perspective to managing people through change from a psychological and emotional perspective.

Leading effectively in the middle requires you to become well acquainted with change management and to develop your own competency as well as the competency of those experiencing the change.

3.  Integrate with other middle leaders

Middle leaders often become marginalized in change when they get caught in the demands and pressures of their own unit. They become isolated and their effectiveness may be diminished.

You need to integrate with your fellow middle leaders and take charge at your level. Use each other to discuss your own reactions to the change, to talk about what the new environment could be like and how it may function operationally, and to find your voice in the change.

You have a particularly important contribution to make to the change. You and your peers have as much command of the inner workings of the work system as anyone – perhaps more because you see across units not just within your own. You need to assert your power in the system because effective change needs a powerful middle.

4.  Become the interpreter of the change for your unit

Given the starting conditions – that the rationale, vision, and plan have been formulated at a higher level – the critical task of leading change in the middle is about making sense of them at your unit’s level. You must become the “change interpreter in chief” for your unit. This involves four elements.

First, translate and communicate the reason for the change in terms that are understandable to the people who report to you. There are basic questions you must address satisfactorily. Why are we doing this? What’s the problem? Why is it problem and where’s the data? What will happen if we don’t change?

Second, describe the eventual outcome as concretely as possible. Help them move from the change as an abstraction to something they can grasp. What will it look like? How will people get their work done? How will they interact? What will people experience?

Third, develop a unit-sized plan. This involves translating the overall project plan into the relevant steps, targets, and schedule that people need to know about in your unit. The focus here is not the project. The focus is people. When will training occur? What will it be about? How difficult will it be? What skills will you learn? How will you make use of them?

Fourth, give everyone a meaningful role in the transition. People support what they help to create so give them something consequential to do. By doing so, you will be helping them to help you move the transition along. Look at the unit-sized plan for transition you’ve created. It has lots of moving parts. Delegate those parts so that everyone in your unit has some meaningful contribution to make. Let them take charge of what’s happening to them and you provide oversight. Do this well and you’ll be amazed at what happens.

When you learn the business of change, integrate with your peers, and translate and mobilize the change at the level of your unit, you claim the role of change leader that the system needs for effective organizational change. Don’t be timid. Lead boldly in the middle.